When we arrived at Okefenokee National Wildlife Refuge on October 6, 2017. It was hot and humid. How humid was it? We had to mop our ceiling. Yes ceiling. This isn’t one of those predicative text errors. Moisture was puddling on the interior ceiling and not just next to the vents. Our two rooftop air conditioners were able to maintain a comfortable temperature of 72 inside the trailer as they sent water cascading down the gutters like a spring shower.

We knew about humidity, we had lived in Oregon for two years and spent countless summers in Minnesota and Wisconsin. So, we purchased our go to products. DampRid moisture absorbers. Besides the large canister, we purchased three hanging packets and unfortunately I was unable to find the unscented packets and the ‘Fresh Scent’ was overpowering when you hang all three packets in your closet. 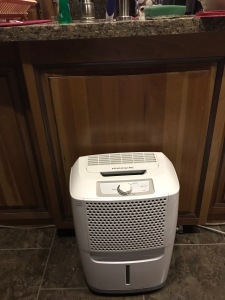 Our fifth wheel is less than 430 square feet and the canister was rated for 300 square feet along with the three packets we were confident we had the problem under control.

Two days later the DampRid containers were filling up with water and I was stilling mopping the ceiling.

This is were the dilemma arose. We worked so hard at downsizing, did we want to upsize and purchase a dehumidifier?

With our previous camper a 24′ Springdale FLWE and our F150 the answer would have been easy. No. We didn’t have the room and the trailer was rated for only 1799 additional pounds.

But now that we have a 39′ Redwood and can carry an additional 4418 pounds the weight was no longer an issue.

The ten day weather outlook called for more of the same and we knew we’d be here for seven more months. So, we went ahead an upsized adding 34 additional pounds to our trailer by purchasing a 30 pint dehumidifier.

Fast forward to November 26, 2017. The weather is cooler and the humidity has dropped. We are no longer emptying the dehumidifier daily and I think our purchase was a good one.

Although I dread the day when we decide to move to a smaller trailer and have to go through the decision making process of what can make the weight. At least we have used the dehumidifier – which is more than I can say about our bikes. Since May 15th we have only moved them once and that was to take them off the back of the trailer.

If we applied the rule of if we haven’t used it in six months we get rid of it – we would have a lot less stuff.

The other thing I know about downsizing is men and women have different ideas of what weighs too much or what’s a necessity.

‘Couple One’ – went around and around because he thought his golf clubs were a non negotiable item, but thought nothing of throwing away her shower squeegee claiming the needed to save weight and storage.

‘Couple Two’ –  Suggested they take her new fiesta ware and the husband told her they weighed too much, but he too packed his golf clubs.

And when these couples got ready to roll out – I benefited from their strict weight adherence – gummy bears didn’t make the cut for Couple One’ and a 12 ounce beer had to be sacrifice by ‘Couple Two’.

Now, if only I could find coin collectors…

DH and I certainly have our difference when it comes to what we should be carrying, but lately the issue hasn’t been what to throw away…it’s been what to buy.